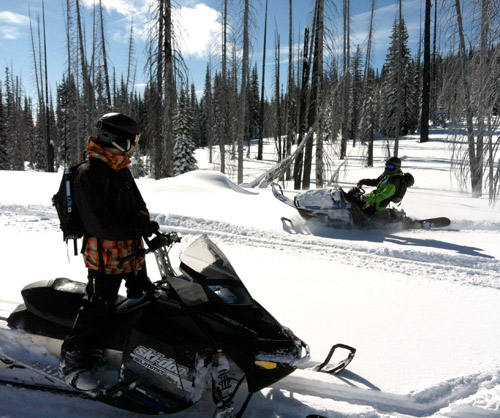 Feb 24th.
Sam and Reid had left Oregon for Idaho two days before.  Joel and I are now packing bags at 9pm at night after a phone conversation with them. They had found a fun sled lapping zone and amazing snowmobiling terrain.  Being the hungry to ride feelow we are, Joel and I returned the travel favor Sam and Raid had made the week before during their trip to mt.Adams and we drove through the night on a Thursday night to meet up for a sled mission. Feb 25.
We meet Sam and Reid in the pretty little lake town of MaCall after a sleepless nigth of driving.  We stock up on health food and charge five minutes out of town to the trailhead.  MaCall has tons of sledders in town during the winter and proper sled infrastructure as a result.  Beautiful groomed trails lead out to open rollers and small ridges everywhere that are scatter with burned trees.  This place is prime for snowmobiling.

We find a small sled lap with smooth, fresh snow, about 8 inches deep with a soft base.  There are rollers to ollie off between every turn it feels like.  Small fractures in the snow were visable on every aspect, on every ridge.  The avalanche danger kept us on our toes and off of any truly steep terrain.  Day 1 was filled with laps made by a four pack of boarders on sleds.  We ended the day with a tour of the area, finding a long climb that resulted in two more longer runs on the boards and an idea for day two.

Feb 26th.
Pack up the hotel room, gas up sleds, make it to the trailhead before it fills…  It snowed over night.  What looked like a dusting of snow at the trailhead deepened as we rode into the mountains.  8 miles from the parking lot we were breaking trail on the groomers with a foot of fresh laying over the smooth groomed trail.  Faceshots on the trail ride to a lap is a beautiful thing.
We poked around trying to create a pillow lap.  The lap didn’t pan out and time was slipping.  Recreating the last run of the day before became our mission for day 2.  Joel was able to set a track to the top of the ridge with his big new machine.  We worked for what was probably an hour to set a sled lap up his highmark until we felt confident enough to double up a long, steep and bumpy climb, in low to no visibility during bouts of heavy snow fall.  The turns down from the climb were not documented in this edit but they were fantastic.  A 600 plus vertical foot run in over a foot of fresh idaho snow, sitting on top of a soft, deep base.  Fast, open tree turns, winding down a steep enough face to make slashes in deep new snow.  We each made four laps before calling it and starting a long drive home.

Slideshow: photos by Sam Woolf, shot using his Cannon G12 during his and Reid’s week long trip to Oregon and Idaho.


Created with Admarket’s flickrSLiDR.
All Posts