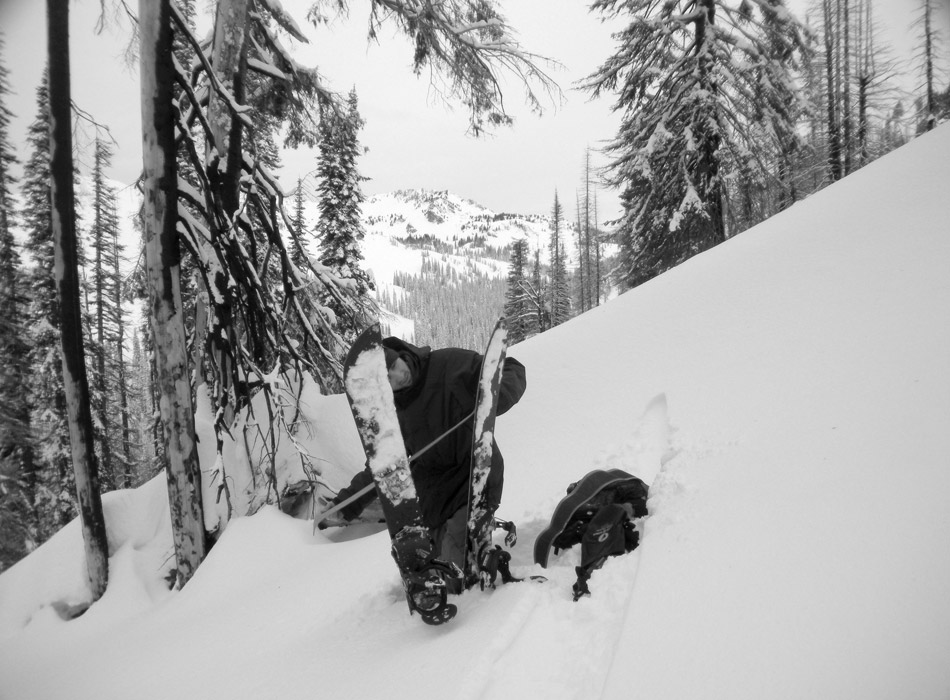 Joel and I drove the six hour Friday night from Portland to the southern Wallowa range.  Maps make the area out to be very worth the gas and energy it take to cross the state.  I had been to the northern side of the range two years prior and Joel has worked in the northern side of the range as well but the south was a mystery to both of us. Being on the other side of the state from Portland, the mountains see very different weather. It had been raining all over the casades for a week and the warm weather was slowly heading east. We decided to catch the last of the state’s powder and test out our new splitboard setups simultaneously. We made the trailhead at 1:30am, just in time for a nip of the Knob Creek and some rest in reclined truck sets.  As we woke at day break, we saw the only sunlight of our short trip.  The sunrise illuminated the entry peaks of the southern Willowas, which looked promising.  My snowmobile has been shop bound for some time with no chance of recovery in sight.  Our adventuring was slighty depended by me having to tow and double-up on Joel’s Laris.  There was a six mile tow up a smooth sled trail to the start of serious peaks.  To our surpirse, once you get six miles in on sled, there is a lodge with cabins and rooms to rent.  Quite popular among the sledders.  It was abvious from the valley we were in that the terrain was worth the drive.  The real question of the trip was how to get to the ridable terrain and would the weather hold out.

There is a yurt operation in this same drainage we were exploring.  We took a few wrong turns in the morning until we received some local directions toward the yurt.  The yurt trail took us up about 2,000 vertical feet and deep into the woods were the snow was amazingly light and deep in comparison to the cascades.  From here on out the video sums up the remainder of the tale.  We got quite acclimated with our skins, learned about a promising new backcountry destination and we will return in the future.  For this trip, the avalanch conditions were so touchy that we did very little riding.  As we trecked around little rollers we propegated the small slopes above and heard the whoomph that no skier wants to hear. The following day we got back out on the trail in the rain.  Covered in trash bags and determined to ride we got deep back into the yurt trail once again, hoping to break the snow line and be rewarded.  Instead Joel and I were stopped dead in our tracks by slides that had occured over night.  We stopped the sled and started to investiagte.  As we stood on a forested hillside treverse we could hear snow moving all through out the valley.  Every slope, every aspect, was moving.  We could see slides happening across the valley between the trees in front of us.  Then we started to hear some nosie from above us and decided that it was time to head home.  These were the worst avalanch conditions I had ever seen and hope to see again.  The pit test in the video was the only good slope we found and we trecked right over it in search of bigger and better runs.  Next time.