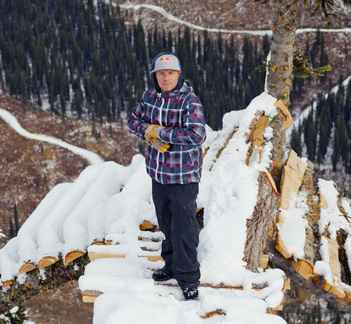 Travis Rice has announced his new Red Bull fueled event that follows and progresses upon his Jackson event four years prior.  The Natural Selection contest was created to showcase a snowboard contest off of groomed slopes, into deep natural terrain that would highlight a different riding style.  The new event, Supernatural, has been sculpted out of wood on a large open run at Baldface lodge in interior BC.  This event plans to bring large pillow features and backcountry booters into a contest format for the first time.

With Supernatural, Travis would like to blend as many differenet freestyle riding disiplines as possible into one event, in order to crown the strongest all around snowboarder.  He thinks there is too big a gap between young-small named pro riders in contest circuits and the older guys who have progessed onto filming video parts in the backcountry.  This event has four wild cards out at large contests this season to bring in some fresh talent along side other riders I’m sure you’d like to see.