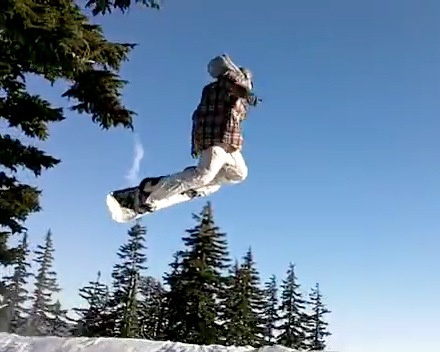 We had a really fun day riding Meadows last weekend despite no new snow in weeks.  Sunshine on the slopes and a sweet crew of guys lapping our big (intermediate at best) terrain park, made for a super fun day.
We even got a jump!  Meadows managed to built a 20ft booter with their 100″ snowpack, which rode well and lasted for many laps.  I took the camera out for a few follow-cam shots through the Forest park and for two rotations off the jump.  Ladd, Daley, Joel, Kelso, Ryan, and Al were all riding really well.  This edit does not highlight the day’s best tricks by any means but rather, the runs I was tired enough to take a break from riding to film.

Meadows, in case you are wondering, needs to step it up.  They say they have their hands full maintaining four terrain parks but this proclamation seems to be a cover-up for the job posting they currently have for a terrain park cat driver.  Meanwhile their clientele is lining up 20 kids deep to hit a single 20ft booter at the top of a park that usually has a five set but mid February.

If you can’t tell by the bitterness of this post that the poor forecast is getting me down, then you are no friend of mine.  I think I’ll resort to a snowdance this weekend.