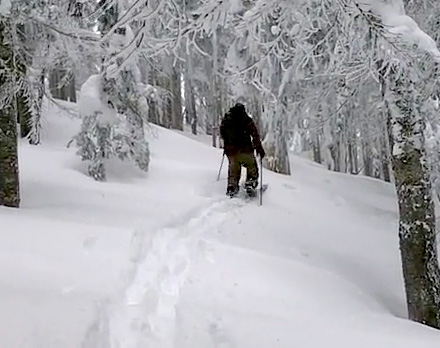 Joel and I went out on Sunday February 27th to a small mountian between Mt.Admas and Mout St.Helens in Washington to get on our splitboards.  There has been lots of new Snow in Oregon and cooler temps so this low elevation (4200ft) run looked promision.  With my sled still being out of commision, Joel dragged me ten miles in on sled treails to the base of the mountain.  We skinned up in about an hour and a half along a forested ridge then boot packed the last 100 vertical feet.  Whiteout conditions slowed our progress both up and down the slope but we found the deep snow.  It was so deep that any sloop seemed not steep enough to really hammer in the turns.

We made two laps exploring the area which was solid enough that we’ll hit again another day.  On the second lap we skinned up in only 45 minutes with an additional ten mintues on either side of re-layering and setup-teardown of the skins and 5 minutes of hiking in our bootpack.  FYI – splitboarding is really physically exhausting but there are always fresh lines.