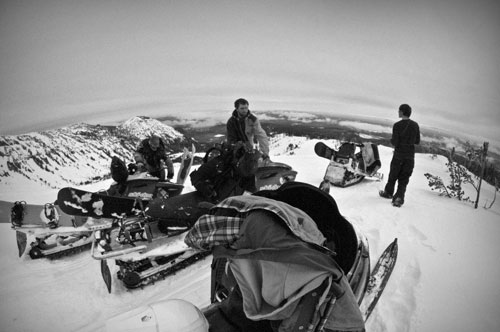 President’s Day weekend is said to be one of the busiest ski weekends of the year.  I usually make a point to get off the resort and distance myself from the crowds but big travel plans fell through and Meadows had enough new snow on Saturday to entice.  Sam Woolf and his “sled marriage” partner Reed still had the travel bug regardless of their weak counterparts and they arrived in Oregon from Utah for a visit.

The video footage from last weekend is light but fear not, good turns were made.  Kelso and I ripped up Hood making our best turns of the day at 2:30 out near the S&R cliffs.  As the snow came in hard that afternoon, the crowds thinned and we rode until close in diving winds.

On Sunday, Kelso and I were met by Sam and Reed for a sled day at Adams.  It was really fun to roll with an awesome four-pack of sledders equipped and motivated by snowboards.  It was hard work getting up high through the new snow and once there we found that wind had destroyed our usual sled lap.  We made decent laps anyways but not video worthy I guess.

Sam, Reed and I, rode Adams a second day on Monday, dragging out the splitboards to take advantage of a skin track set by another party.  We found decent snow stability and some great open chutes through the trees that were steep with about a 500 vertical foot drop.
The video shots show some timid turns at the top of the chutes before we picked up speed on the steeps below with confidence in the snowpack.
The second lap was as good and Northwest A-typical riding as you could ask for, steep rollers on either side of the run and thick snow galore.  We made two laps through these chutes and skinned back to the sleds with big smiles.

Sam and Reed packed up this morning after multiple coffees in Portland and headed to MaCall to escape rain that is hitting the Northwest mountains today.  I wish you luck on your shred/sled adventuring boys, charge!