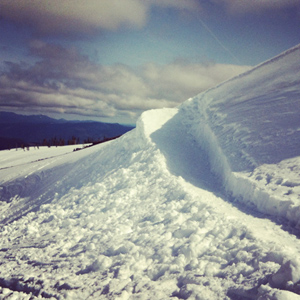 Kelso and I have been talking up “jump building” all season with nothing to show until now. The last weekend in April we took sleds out to Mount St.Helens for a 50+ degree day in search of a wall to build a hip on.

We found the wall but the build on this wall took way more digging than originally expected. Kelsey joined us so there were three shovels at work but we lost CJ to a drunken bike accident the night before. After close to three hours of digging, this hip was really fun to hit. High speed, narrow in run, to a quick lip and soft, warm landing.