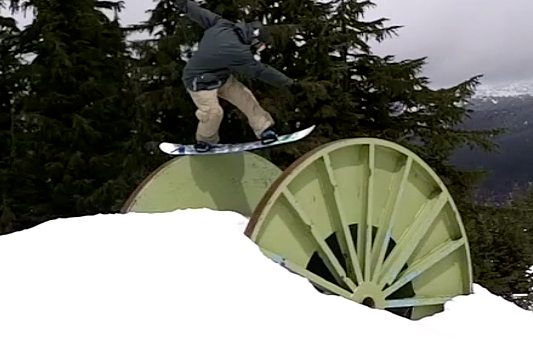 I can’t say it’s the end of the season with the lifts still spinning at Timberline and even at Mt.Bachelor, who will stay open until the end of May but for me this was it.  I finished off the 2010-2011 season last weekend (May 14-15) riding Mt.Bachelor in Bend, OR with Al Brede.  It was my birthday weekend so the evening celebrations and the two concerts on consecutive nights prior the trip made for a tired day of riding Saturday.  Highlights of the day were the BrewFest at the base lodge that Al and I were setup with with free cups and endless beer and the air bag that took me out.

I watched Al fire off a one and a half rotation backflip into an airbag set up in the melting halfpipe at the base.  Five bucks a hit and signing off on a release forms and you to could chance getting hurt on the no-consequence airbag.  My lame back three to stomp ended really poorly.  The base of my board stuck to the cushion as my body contorted upon landing.  I felt a sharp pain from my ankle and knee, which ended my park riding for the weekend and left me out of this edit.  Stiff pain followed by ice, beer and wraps was the result.  I’m feeling better today but the ankle will need some work.

The weather was off and on all weekend.  We started our day with think clouds and snow Sunday morning.  Both days the snow softened and we hit new park features with soft landings.  Al took some good slams, hitting his kuckles and ass during memoriable box encounters.  His falls did not go in vien, Al has put in the time this spring riding Timberline multiple days a week and it’s showing. Check the up down rail and the battleship box shots in particular.  He gapped from the top of the up-down to a quick front-board tap before riding out switch.

Mt.Bachelor has provided me with a really fun, park riding closer out for the past two seasons.  They have some impressive parks that feel so fresh after lappng Meadows for weeks in April.  All the new features to hit also sets me up nicely for park riding this summer on Timberline.

Until then, thanks for following Big Flakes, expect more post authors to be contributing for next season.  -TD