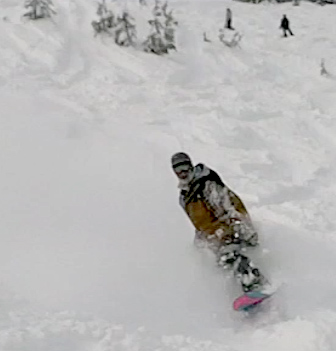 Saturday November 19th, Mt.Hood Meadows opened for the season after a cold front pushed through dropping three feet of new snow.  What was reported to be a very limited opening expanded last minute after another over night dump putting the base depth at 45inches.  Some of the major quads opened up and intermittent blue sky shined on us as we rode some of lightest snow I’ve ever ridden on hood.  Rocks poked through from all directions and Ladd’s board was dealt a pretty serious blow by the early season conditions.  Despite no real base, the mountain rode insanely well with snow so deep you could come to a halt in waits deep snow if your board’s nose sank.

Thanks mother nature for that.  I had seen too many snowboard videos this pre-season and was getting a little bent, thinking that certain turns don’t exist for the common man.  Today was a good reminder of how good powder turns can actually be.

Sorry for the shitty filming, I forgot how to shoot my handheld camera over the summer.  Here are a couple shots of deep turns.  I kept the camera in my pocket most of the day but remembered to catch a little bit of Kelso and Ladd action.  Welcome to Northwest snowboarding Kelso.