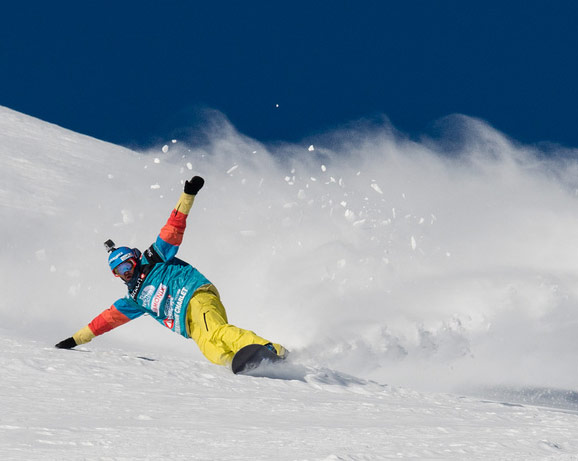 The North Face Masters freeride snowboard series has been restructued for the 2013 season.  The series is now run with the freeskiing tour as a combined event series.  Additionally, the tour has beefed up with new stops.  In past years, the tour consisted of only three US stops (Kirkwood, Crystal and Snowbird I believe) and one European stop.  For 2013, The tour has expanded to six stops, with only one of which being in the US, at Kirkwood.

The season kicked off in mid January at Revelstoke Mountain Resort, BC.  What a way to start the tour.  Revelstokes’ deep snow pack and steep terrain set the tone for this year’s freeride tour.  The event has shifted to a one run event.  Riders are forced to perform right out the gate with no practice on the run they are competing on.  A mix of technical riding, airs, style and fluidity are the core elements for judging this event.
See minute 2 and beyond of the video above for footage of Ralph Backstrom’s winning run.  He pushed outside of the tracked , steep opening face and found himself some amazing snow and large drops stacked one after another.

Sam Woolf is working on the Freeride World Tour this season.  After having seen his Instagram posts from Revelstoke, I pestered him to provide a few word on the first stop of the tour and on Ralph winning run.

“BC was absolutely incredible.  The whole magnitude of the Canadian Rockies is unfathomable—even when you’re in them.  5750 vertical feet from the ridge where we built most of our event site to the bottom lodge–that’s Jackson Hole stacked on top of Baker!  The only way to do such a thing is to use heli’s and long line in most of the gear.  Using Cat’s takes far too long and cannot be done in the time frame we are given.  So we bundle up heli nets and fly the necessary gear to the appropriate places on the mountian.  It was wild.  11 heli nets came off the ridge the day after the contest.”

Sam on Ralph’s Win: “He absolutely deserved to win.  He found the crispiest line on the face with by far the best snow and features.  The day before the contest (venue inspection day for the athletes), Ralph was the ONLY rider we saw looking at the venue.  He was on an adjacent ridge, hunkered down in a tree well, out of the wind, studying.  Waiting patiently as the clouds lifted and dropped all day, to get collect enough beta on the current conditions of the venue.  Pictures only do so good, especially pictures taken 4 days prior to a storm cycle that completely reshapes and redefines a face like Mack Daddy.  He was on the ridge for hours, alone, staring at that face.  It was quit cool to see.”