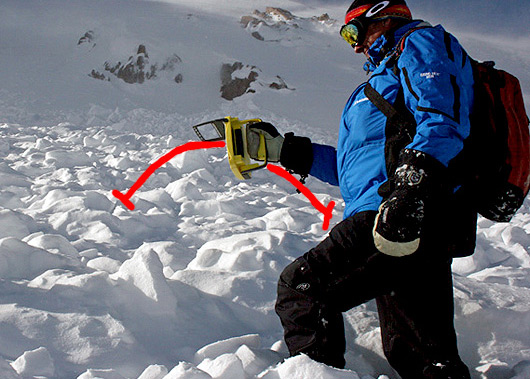 As a modern backcountry traveler, I leave the trailhead in the morning decked out with a digital camera, phone and radio.  I had never thought about the issues all my gadgetry my cause to my avalanche transceiver’s effectiveness during search and rescue.  In recent years the avalanche and snow science communities have also become interested in electronic’s interference on beacon searches.  Highlighted in a Teton Gravity Research blog post, they share the facts about a recent field test preformed by Alaskan snow science student John Barkhausen.

John’s finding after testing the effectiveness of his beacon while in close proximity to various modern electronics (cell phone, digital camera, Go-Pro camera, radios), was that there very well can be interferences that through off your beacons accuracy.  The beacon may fluctuate in it’s direction and distance reading when held closely to certain electronics.  However, the overall impact of consumer electronics on a transceivers effectiveness is much lower than expected.  When the transceiver was held out in front of one body (as it’s supposed to be), the impact of electronics was eliminated.

This does not mean it’s best to have a handful of electronics turned on during a search and rescue procedure   It is recommended that you turn your cell phone to Airport Mode while in the backcountry to reduce transmitting signals.  Turning other electronics off while not in use is also good practice for safer backcountry travel.

Beacon Search Reminder: Hold your beacon out in-front of you, 24 inches away from your body, while you are in active search mode.

“Ultimately, Barkhausen found that none of these electronic devices produced negative impacts on a transmitting beacon. That was big news, as some outfits had initially thought the use of, say, a GoPro or even having a digital camera in ones pack might throw off the ability of a transceiver to function as it’s been designed. He also found that no particular brand of transceiver was more or less affected than the other.” — TGR Blog